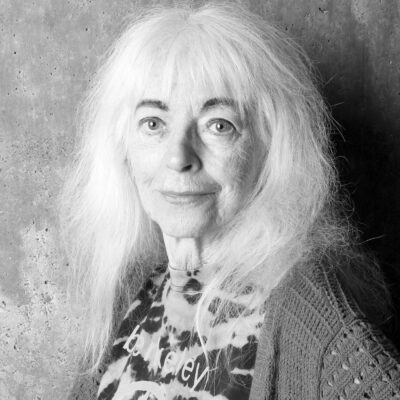 I am interested in the illusion and reality of space as it is depicted in both traditional and non traditional art forms. 2D and 3D space in computer rendering has a remarkable visual unreality about it, an unreality that has infinite variety. I search in this enormous variety for bases of conceptual thought.

Professor Penny (Margaret) Dhaemers was called back from retirement in 1996 to continue to teach courses in Computer Graphics Rendering and Animation (ARCH 129, 138, 139X, 229). The program includes guest lecturers and field trips to course-appropriate locations. The syllabus in the class website underlined below delineates the curriculum and shows examples of the work.

Dhaemers was the fifth chairman of the Department of Design, CED, from 1970-1974, and chair of the Program for Visual Design from 1974-1976. Until 2005, she was the only female chair in the history of the CED. After 1976, when all the programs on the campus were required to be located in a department, a highly active Visual Studies Study Area was incorporated into Architecture. The Visual Studies faculty became part of the Departments of Art, Architecture and Landscape Architecture as chosen by each. From 1976 until 1994, Dhaemers was chair of the Visual Studies Committee.

Dhaemers was an NEA grant recipient. Involved with multimedia since the seventies, she was associated with the National Center of Experiments in Television (NCET) of KQED and regularly received equipment grants. She was co-producer of video productions with Professor Emeritus Willard Rosenquist and Tom Hutchinson of the Media Center using imaging, dancers and computer musicians. They produced Digressions, and Light Gestures.

Her book reviews include CPM for the Kaypro, Computer Graphics: A Survey of Current Techniques and Applications by John Lewell, for the Design Book Review. One of her major photographic projects was the visual and detailed examination of the Maybeck Recital Hall on Euclid Ave in Berkeley. She is represented in many collections with photographic, art and computer art works appearing in numerous publications: Arts and Architecture; she was featured in the PC World article Dynamic Design: CAD for Arts Sake by Janette Martin; she wrote many articles for the American Society of Media Photographers professional bulletins including an autobiographical article. Fleeting Electronics: Electronically induced Still Images; she was one of the featured digital pioneers in Digital Pioneers, a book on Digital Photography by Mikkel Aalund, Random House, 1992, etc.

From Sept. to Nov. 2000: Dhaemers images defining and displaying Videospace were amongst the featured aspects of an exhibit curated by Steve Seid of the UC Art Museum showing the experimental work of NCET.

Until 2005, Dhaemers had served on the campus Dorothea Lange and Eisner committees for many years. She was a mentor for Elizabeth Lane, Philosophy major, who competed in the HAAS Scholarship Program Award, 2003-04. Lane's thesis, "The Elderly Among Us," was a photographic presentation. Dhaemers is a continuing member of the CED Distinguished Alumni Awards committee (2005-09), was a member of a faculty position search committee in 2008, and was a member of the Dean’s Search Committee from 2008-09. She was and is an affiliated faculty member of the BCNM (Berkeley Center for New Media) 2007-09 located in the new CITRIS building on Hearst Street on the campus.

Her current research activity is primarily involved with creative output combining many computer programs in both 2D and 3D. She is a member of ACM (Association of Computing Machinery) and SIGGRAPH and has been a board member of the San Francisco SIGGRAPH chapter.