Last year, Governor Gavin Newsom signed the California Housing Opportunity and More Efficiency (“HOME”) Act, otherwise known as Senate Bill 9, which was introduced by the Senate President pro Tempore Toni Atkins. This new law enables homeowners to split their single-family residential lot into two separate lots with each able to hold up to two homes. If utilized to its full potential, this law allows owners to create up to four units of housing on what was previously only a single-family home. The legislation represents a potentially sweeping change in a state that has historically held vast amounts of land for single-family only uses. However, recent media coverage has shown that localities may be taking advantage of the bill’s broad language to implement the HOME Act in ways that would limit the number of new homes built. A recent, extreme—and ultimately unsuccessful—example came from the city of Woodside, where council members proposed establishing the town as a mountain lion sanctuary to claim that the HOME Act did not apply to their community. The Attorney General pushed back, declaring that such a policy would not exempt the city from state housing law. Other localities have implemented less obvious—and likely more legally defensible—restrictions that may stymie meaningful new homebuilding as a result of the new law.

A 2021 Terner Center analysis estimated that the HOME Act could enable the creation of 700,000 new market-feasible homes throughout the state (Figure 1). As the report emphasized, however, this number is contingent on property owner interest and construction costs as well as contingent local factors such as adequate contractor capacity and availability of appropriate mortgage products. Central to these dimensions is the degree of support from local jurisdictions: the ways that localities implement this law will have a significant impact on new homebuilding enabled by SB 9. As designed, SB 9 allows jurisdictions to implement the law using their own objective design standards and limitations and allows for the imposition of additional restrictions outside of a broad baseline of requirements as laid out in the bill. These loose conditions have created a massive statewide laboratory of sorts, with over 500 local jurisdictions that each have an opportunity to implement the HOME Act in their own unique ways. In the cities we examined, no two ordinances were alike. In addition, homeowner associations are allowed to ban SB 9 lot splits—a practice outlawed for statewide ADU standards—thereby allowing some organizations at the most local level to further limit unit feasibility…. 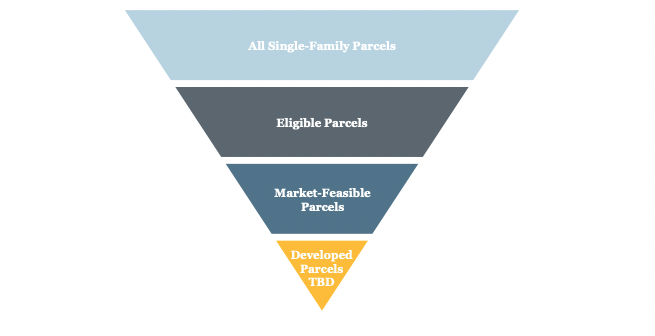