Draft is defined as an unwanted local convective cooling of the body caused by air movement. The main factors that affect draft are air temperature and velocity, air turbulence, body parts exposed and clothing insulation level, and overall thermal comfort.

Historically, the literature on draft has focused on thermal discomfort at the neck, which was considered the most sensitive part of the body, especially as the majority of mechanical systems supplied air from the ceiling. Now, owing to the widespread use of floor-level air distribution systems (underfloor air distribution or displacement ventilation) and dress customs in which ankles could be uncovered, the need to assess draft risk for the ankle has emerged. The purpose of the present study is to experimentally evaluate local draft risk for uncovered ankles associated with displacement ventilation and underfloor air distribution.

Thirty female subjects (age = 24.1±6.8 y, BMI = 21.2±2.2) participated in nine double-blind and fully randomized climatic chamber tests. Only female subjects were selected because according to meta-analysis by Karjalainen (2007) females are more likely than males to express thermal dissatisfaction. The subjects were instructed to dress in typical summer office clothes with their lower legs bare. They wore flip-flop sandles without socks. Results are available here.

This study was funded by the Republic of Singapore’s National Research Foundation through a grant to the Berkeley Education Alliance for Research in Singapore (BEARS) for the Singapore-Berkeley Building Efficiency and Sustainability in the Tropics (SinBerBEST) Program. BEARS has been established by the University of California, Berkeley as a center for intellectual excellence in research and education in Singapore. 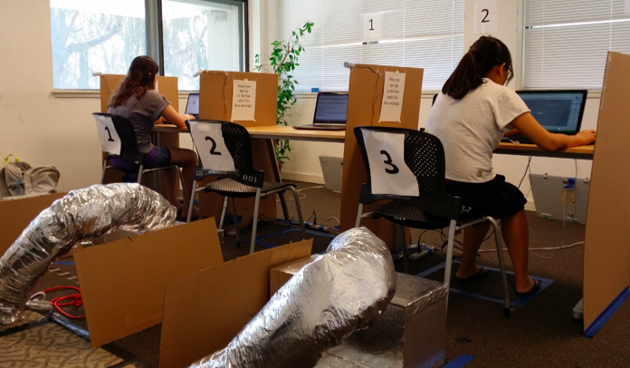 Center for the Built Environment, UC Berkely and SinBerBEST (Funded by a grant from the Republic of Singapore's National Research Foundation.)

IN COLD OFFICES, IT'S ALL ABOUT YOUR FEET