From Princeton Architectural Press: With three billion more humans projected to be living in cities by 2050, all design is increasingly urban design. And with as much data now produced every day as was produced in all of human history to the year 2007, all architecture is increasingly information architecture. Praised in the New York Times for its "intelligent enquiry and actionable theorizing," Local Code is a collection of data-driven tools and design prototypes for understanding and transforming the physical, social, and ecological resilience of cities. The book's data-driven layout arranges drawings of 3,659 digitally-tailored interventions for vacant public land in San Francisco, Los Angeles, New York City, and Venice, Italy. Between these illustrated case studies, critical essays present surprising and essential links between such designs and the seminal work of urbanist Jane Jacobs, artist Gordon Matta-Clark, and digital mapping pioneer Howard Fisher, along with the developing science of urban nature and complexity. In text and image, Local Code presents'a digitally prolific, open-ended approach to urban resilience and social and environmental justice. At once analytic and visionary, it pioneers a new field of enquiry and action at the meeting of big data and the expanding city. De Monchaux's first book, Spacesuit: Fashioning Apollo (2011), was best book of the year on numerous design and technology lists.
Work 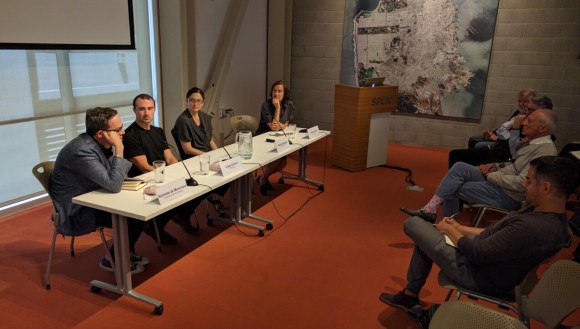 The Death Star, Apple and Urban Design: SPUR Talk on the Future of Cities