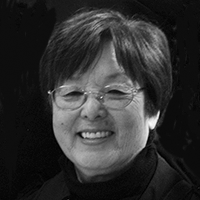 Professor Ishikawa is an architect specializing in people-space relationships at urban, as well as smaller, scales, with a particular interest in affordable and low income housing and community facilities. She is co-author of A Pattern Language and The Oregon Experiment.

She has served as Assistant Planner for the Oakland City Planning Department and Program Developer for the Western Addition and Chinatown anti-poverty program in San Francisco. From 1960 to 1994, Professor Ishikawa taught design, housing design, community design, social and cultural factors in design, and the pattern language at Berkeley, where she also served as Associate Dean.

Professor Ishikawa has also taught at other academic institutions in the United States and abroad. She holds a Bachelor of Architecture degree from Berkeley.