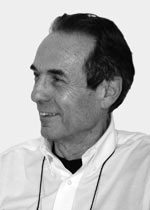 Daniel Solomon, FAIA is an architect and urban designer whose 42-year career combines achievements in professional practice with academic pursuits of teaching and writing. His projects have been published in architectural journals worldwide and have been recognized with more than ninety awards.

Mr. Solomon's commitment to urban repair and the construction and reconstruction of urban neighborhoods extends beyond his project work; he is a co-founder of the Congress for the New Urbanism, an organization whose principles have helped shape the contemporary practice of community design. He is author of many articles and three books: ReBuilding, Global City Blues, and Cosmopolis.

He was twice named to Architectural Digest's 100 Foremost Architects, worldwide. He is the 1998 recipient of the Seaside Prize for contributions to American Urbanism. In 2004 he received the Maybeck Award from AIA California Council for lifetime achievement in design, and in 2008 was named Housing Hero by the San Francisco Housing Action Coalition.

Mr. Solom received his Master of Architecture from UC Berkeley in 1966. He taught in the Architecture department at CED from 1966 to 2000.