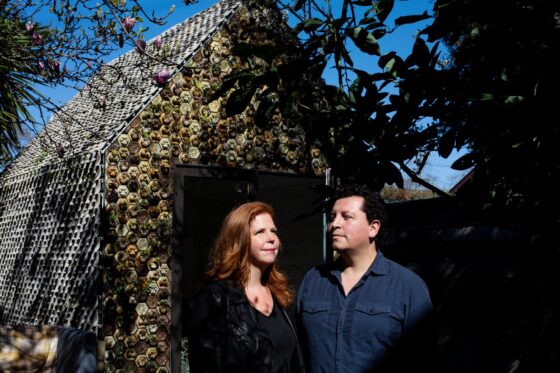 On a cold winter day in Oakland, Professor of Architecture and Eva Li Memorial Chair Ronald Rael and his partner and architect Virginia San Fratello are seated in their cozy 3-D printed cabin in their backyard. A wall of moist succulents on the facade are embedded in rosette-patterned tiles 3-D printed from chardonnay grape skins, sawdust and cement.

Inside, a translucent bioplastic wall with cloudlike swirls — also 3-D printed — changed colors on demand as Rael, with a clicker, shifts the hues from pink to green to purple, bathing the interior in otherworldly light.

It was just another weekend for the couple, 3-D printing pioneers who have developed novel techniques for sustainable building, often using low-cost waste materials like mud, dirt, nutshells, coffee grounds, and other discards that are “essentially free,” San Fratello said.

Along the way, they have made 3-D printing cheaper and more accessible, often relying on lightweight printers to fabricate architectural components that can be assembled into large structures. These include the “Cabin of Curiosities” prototype in their backyard.

San Fratello and Rael “create complex and fantastic forms that couldn’t happen any other way,” said Ellen Lupton, senior curator of contemporary design at the Cooper Hewitt, Smithsonian Design Museum, which included their work last year in its show, “The Senses: Design Beyond Vision,” and acquired a “Furry Curry Casserole” 3-D printed from curry powder. “They have the hybrid brain of an architect, an alchemist and a pastry chef,” Lupton added.

Rael and San Fratello, both 47, are evangelists for the 3-D cause: He is a professor of architecture and art practice at the University of California, Berkeley; she is an associate professor of design at San Jose State. Their studio, Rael San Fratello, produces elegant and slightly oddball designs inspired by ancient craft traditions, like coiled pottery.

Though the forms are drawn from indigenous sources, the production of 3-D printed tiles and other components is anything but. Rael and San Fratello deploy a variety of printing methods, often using a process invented at the Massachusetts Institute of Technology called “binder jetting” that consists of a liquid material being sprayed onto a thin layer of powder hundreds or thousands of times until a hardened object emerges. The two also invented a software application for a 3-D printer that extrudes wet clay, pushing it through a nozzle like a gigantic toothpaste tube.

A series of clay vessels called “Bad Ombrés” was produced by this extrusion method: the name alludes both to President Trump’s comment about Mexicans and a term for the gradual blending of one color into another. Like much of the pair’s work, the vessels marry artisanship and geekiness. The clay is built up layer by layer, producing striated patterns and surfaces resembling knitting, complete with knots and loops. Occasionally, the code will tell the printer to drop a stitch, which creates visual drama.

As they document in their book Printing Architecture: Innovative Recipes for 3D Printing, published last year, mud is dear to their hearts. Rael grew up in an adobe house built by his great-grandfather in a small Hispanic village in the San Luis Valley of Colorado. His youthful playgrounds were adobe dwellings in varying states of decay. “I was fascinated with the cactuses growing on roofs, the rays of light and dust,” he said.

They met in 1995 on their first day of architecture school at Columbia University, and traveled to Yemen to explore the ancient walled city of Shibam, a dense cluster of ancient mud-brick buildings often called “the city of skyscrapers in the desert.”

Their design for a 3-D printed free-standing adobe structure is currently on view in the exhibition “New Cities, Future Ruins at the Border” at the Rubin Center for the Visual Arts at the University of Texas at El Paso (through April 6).

It is also the product of an unusual cross-border collaboration. Accompanied by their 9-year-old son, Mattias, as well as ceramics students, architects, professors and community members, they lead clay scouting expeditions, shovels and buckets at the ready, pinpointing, say, a patch behind a Subway shop in Texas or a Juarez brick factory. For the project “Zoquetas Fronterizos” (Mud Frontiers) the students learned to shovel mud into 3-D printers, building circular adobe structures on a mesa overlooking Juarez.

The border has been a recurring theme in their work. Rael wrote Borderwall as Architecture: A Manifesto for the U.S.-Mexico Boundary (2017) on alternatives to President Trump’s wall, most serious but some fanciful. They have created a poster, called “Reunite,” about family separations at the border, that has been turned into a billboard at Amsterdam Avenue and 110th Street in Manhattan by For Freedoms, an arts nonprofit.

But it is the pair’s status as the Lewis and Clark of the digital frontier that has impressed the techno cognoscenti. “Instead of paying $600 for 30 pounds of standard materials that come with printers, we said ‘Hey, let’s use salt!’” San Fratello explained. Their spinoff company, Emerging Objects, has recently worked with 3D Potter on a new type of printer to develop low-cost housing using adobe.

“They refused to accept the proprietary materials being sold by 3-D printer companies,” said Joshua D. Stein, a professor at Woodbury University in Burbank and co-director of Data Clay, an online database dedicated to ceramics and emerging technologies. “They said, let’s just hack the ingredients and see what we can do.”

The international roster of designers engaged in the 3-D process, known as “additive manufacturing,” is expanding. Among the most high-profile is Joris Laarman of the Netherlands, who started his own robotics company and whose swooping, technically complex metal furniture has fetched hundreds of thousands of dollars at auction. The DFAB House in Zurich, a collaboration between the Swiss National Center of Competence in Research and university professors, also pushes the digital building frontier. The architecture was robotically assembled and features a free-form 3-D printed “smart slab” ceiling that is half the weight of concrete.

Rael and San Fratello are committed to democratizing the process for their young acolytes and others, making the point that 3-D printing from “upcycled” materials otherwise destined for the trash heap, and forgoing the purchase of drywall and other construction supplies, is a more sustainable design approach. Ingredients like curry and coffee grounds not only lower the cost, they add a dash of poetry, retaining their aroma long after being transformed.

To spend time at Rael’s graduate “print FARM” — the Facility for Architecture, Research and Materials at UC Berkeley’s College of Environmental Design, is to feel a bit like Lewis Carroll’s Alice as she took her first nibble on the mushroom. It is to encounter a gray “Seat Slug” printed from cement. A light-as-a-feather, star-shaped “Poof” from tires that were pulverized and freeze-dried. It is to wonder about strange-looking squiggles resembling black licorice shoelaces.“That’s a failure,” Rael said of the bioplastic building material meant to turn snow into patterns on buildings.

Some of the most mesmerizing projects are the couple’s collaborations with scientists. These include ceramic units for seeding coral larvae, spearheaded by Secore, a conservation organization that restores coral reefs. Scuba divers have already placed these microhabitats —- which have little legs and look as if they might skitter across the sea bottom — in endangered reefs. The 3-D printing allows quick replication.

San Fratello and Rael have also worked with conservationists on ceramic nesting modules for the stocky seabirds known as Cassin’s auklets, off the California coast. (The nests have to accommodate the weight of lolling sea lions, and a private compartment for adults away from their boisterous chicks.)

At home, San Fratello and Rael keep a 3-D printer on the dining room table and use it to produce the occasional Captain Underpants figurine for Mattias. Their devotion to the 3-D process, they say, is the connection it provides between the designer and the machine, a relationship lost with mass production. Their mission is to create objects and structures that are beautiful — and resolutely human.

“There is a culture embedded in the materials that surround us,” Rael observed. “We’ve lost the intimacy with materials, their tactility. How can you be intimate with foam?”