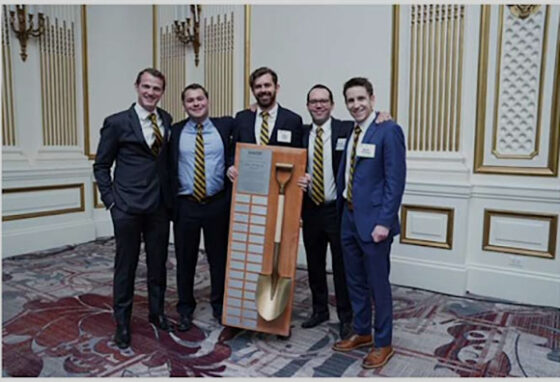 The NAIOP Golden Shovel is a collaboration between Haas Business School and CED in which MRED+D students collaborate with students in the Haas full-time MBA, Haas evening/weekend MBA, Master of Architecture, and Master of City Planning to take on Stanford in a development competition. In the early days the Golden Shovel was only between Cal and Stanford business schools, but has since expanded to the design and engineering schools at the respective universities.

This year UC Berkeley’s team beat Stanford with their proposal for a significant redevelopment in downtown Sausalito, bringing Cal to an all-time 19-14 record against their cross-town rivals. Although the UC Berkeley team was primarily composed of Haas MBA students, MRED+D’s Brent Clark served as team captain, and contributed important development and design knowledge to the group.

Q: What challenges did the team face?

“One of the great challenges of this year’s competition was working in an extremely conservative city that is notoriously difficult to develop in while developing a proposal that caters to the needs of the city, the residents and also the States RHNA requirements. Our proposal addressed the following topics:

a) Create state-of-the art public facilities including a City Hall and Library, at no direct cost to Sausalito;
b) Prepare a roadmap for satisfying Sausalito’s Regional Housing Need Allocation (RHNA)
c) Catalyze a new vision for Caledonia, which will serve as a beacon of sustainability and inclusion; and
d) Fortify the City’s annual budget.”

Q: What aspects of your team (the people, their backgrounds, their experience, etc.) put the team ahead of Stanford to win?

“Our coaches, Bill Falik and Abigail Franklin did a great job in building a winning team with diverse backgrounds. This winning recipe consisted of having individuals with real world experience in architecture, affordable housing development, project management, law and marketing. All of these skills form the foundation of any real estate development project. One of the most important aspects of the team was that from the onset we worked and collaborated extremely well with each other and became close friends throughout the process. We established our as a team goals early on in the project and this created a clear path to victory.”