In 1985, after viewing Washington D.C.’s many monuments to war, Elizabeth Ratcliff wondered why there were no monuments to peace. Thus began the grassroots movement for the creation of a Peace Garden in Washington D.C. The Bill to establish a National Peace Garden was passed by Congress, and signed by President Ronald Reagan in 1987. Following a rigorous site selection process, members of the Peace Garden Project Committee, headed by Garrett Eckbo, chose Washington D.C.’s Hains Point as the future site of the Garden. In 1989, the National Endowment for the Arts provided a $75,000 grant to help finance a design competition for the Garden. The Design Competition jury unanimously selected architect Eduardo Catalano’s olive branch design as the future plan for the National Peace Garden. However, in the spring of 1992, it was unanimously rejected by the U.S. Commission of Fine Arts.

After careful consideration, the firm of Royston Hanamoto Alley & Abbey (RHAA), was chosen to develop an new design. The plan was approved by the Commission in July of 1993. In 2003, unable to raise the necessary $20 million for the construction of the garden, and the additional $2 million for its maintenance endowment fund, the authorization period for the National Peace Garden expired, and the 18-year project was abandoned.    The Records of the National Peace Garden span the years 1985-2002. The Records are organized into five series: Board Records, Public Relations, Design Competition, Catalano Design & Collaboration, and Royston Design & Collaboration. Within these series, subseries have been organized according to category and chronology. The Records contain information on the operations of the Board of the National Peace Garden, as well as fundraising and marketing measures, correspondence related to the Garden, design competition logistics and submissions, and drawings and discussions on the design of the Garden from many designers including Garrett Eckbo, Eduardo Catalano, Charles Atherton, Robert Royston/RHAA, and many others. Audio and video cassettes of design discussions are also included. 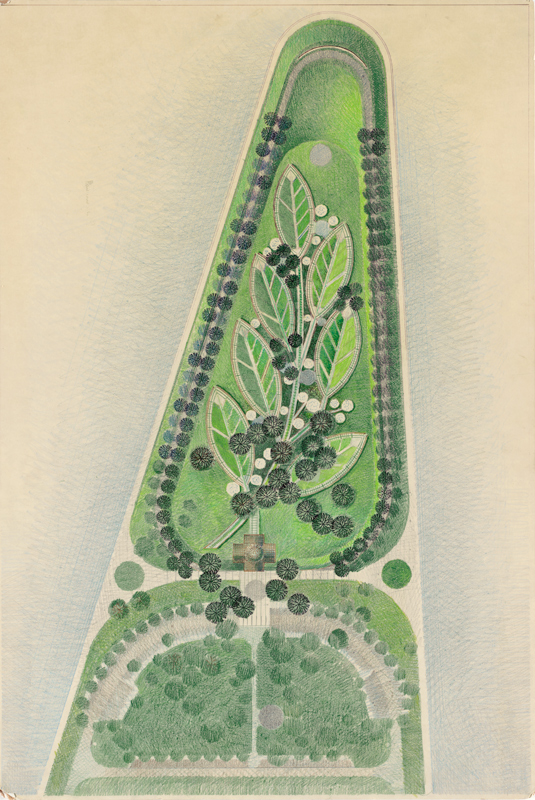